Just over a month ago, Free the Blobs had its first public debut at EGX Rezzed.  The whole event took a lot of preparation (see previous post) and there were some fears that our mobile game would not be well received at such a predominantly pc and console exhibition. However it was a huge success and an amazing experience. 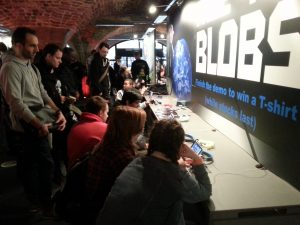 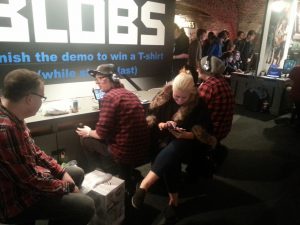 The game was hugely popular. Throughout the entire event our stand was busy and often there were people queuing up to play our game.  One of our only regrets is that we should have brought along another tablet to increase the throughput of players!  On several occasions we had people downloading the demo onto their phones and playing at the stand because the demand for seats at our stand was so great.  It’s particularly humbling due to the nature of the exhibition and quality of the games being presented there. 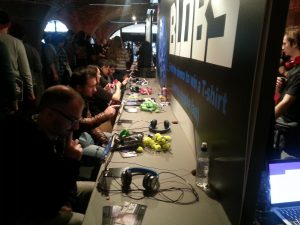 It’s difficult to explain the feeling of watching loads of people playing your game for the first time.  Until EGX Rezzed the game had only been played by a few close friends and family, but here it was being played by hundreds of people.  It was an amazing feeling just to sit and watch people be entertained by something that we’ve worked on so hard. It was a validation of both the game and the reason why we make games. 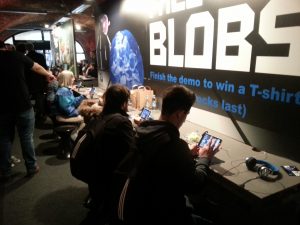 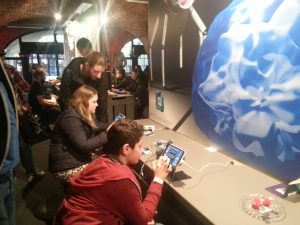 We were amazed at the length of time some people spent playing our game. We were far too busy to accurately time anyone, but we had several people sitting at our stand for well over an hour trying to complete our demo.  Initially we believed it was just the lure of the free T-shirts, but this was not the case!  Even after our daily supplies were exhausted, people still sat at our stand for ages trying to finish the demo.  It was a bit surreal to watch, that someone would come to an event like EGX Rezzed with hundreds of amazing games and yet they would sit for so long on our humble little mobile puzzler.

There was a revelation at the event – our game was surprisingly popular with children.  Undoubtedly some parents saw our game as a child friendly and therefore encourage their young children to have a go.  However our game is quiet difficult, with many adults who tried to finish the demo failing to do so.  Yet despite this many children really liked our game!  On average the children fared about as well as the grown ups and we had many of them finish the demo. The youngest winner we had was eight, which was amazing!  This was not a market we had originally intended the game for, but its something we will look at in the future.  We might even consider releasing a child focused version of the game, with the same core mechanics but just with slightly easier levels.

It was an incredible experience to meet and watch so many people playing Free the Blobs. Engagement with the target audience in the gaming industry is difficult, but what better way to do this than to actually physically meet the people and watch them have fun with your game.  No regrets (apart from not bringing another tablet).