One of the most exciting features of Free the Blobs is that it contains a level editor.  This allows users to create new levels using their mobile device. 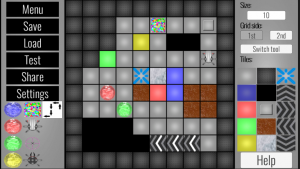 The editor allows people to create their own levels from scratch. This is same editor that was used by Wookanana to create the levels in the game – no artificial restrictions have been added.  As well as allowing users to recreate and adapt any level of the game, players now have the chance to indulge their own puzzle creation talents.  Like battling against multiple robots as once?  No problem – create level where you can fight against up to 12 robots at once!  Enjoy classic puzzle mechanics with blocks and switches?  Create huge 20 by 20 grids littered with switches and blocks and let your mind boggle at trying to find the path through.

Although its enjoyable to play through your level creations, the most fun comes from inviting your friends to take on the challenges that you have created.  Fortunately sharing levels with your friends is fairly simple.  By the simple click of a button the editor composes an email with your level attached, which you can then send on to whom ever you desire.  On receiving such a file the recipient merely needs to click on the level and it will automatically launch Free the Blobs where the level will be waiting for them in the “Downloaded” section.  It’s really that simple.

Furthermore, the level files work on either Android or Apple devices, thereffore allowing you to share with more of your friends!

The editor interface is fairly intuitive, but a few aspects such as the switch tool require some explanation.  Fortunately there is an online tutorial  for the editor which has been posted on our YouTube channel, which you can watch below.

Wookanana looks forward to seeing the levels that you create and solving the challenges that you devise.  In some way the editor switches the roles of the game-maker and the players 🙂