As part of putting the final polish on the game before its release, we’ve been working on the cut scenes for the game.  For release this will just consist of two cut scenes: an intro and a game completion one.  After release there is the intention to release small cut scenes corresponding to progress within the game (e.g. for when ice tiles are first encountered).

So what do these cut scenes look like?  The below screen shot gives you an idea, but you can watch the whole intro cut scene by following this link: https://youtu.be/pG_scT8_rpc 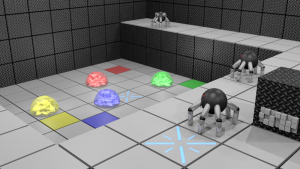 The intro basically sets the story for the game, showing how the robots accidentally created the blobs and then decide to imprison them.  This video will play within the game when ever a player chooses to start a new game.